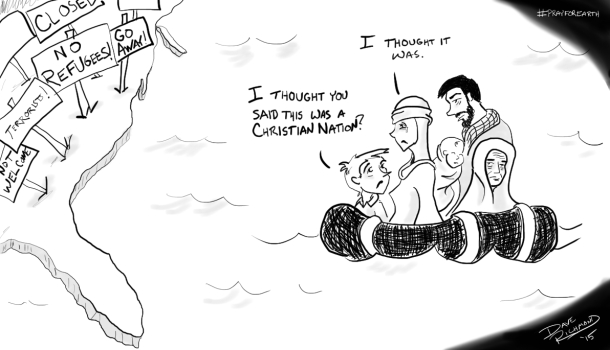 I know this won’t be popular. I know it will be hard for many to swallow. I am not posting this to start an argument, so comments are turned off. I am posting this to make the Christian think. So please, pray over this before you share or sound off on it.

You can’t have it both ways.

You can’t argue for ten commandments in courtrooms on the basis that this is a “Christian Nation*” and deny refuge to the most downtrodden people on the globe.

You can’t expect our government to uphold a Biblical view of marriage because we are a “Christian Nation” and refuse to offer hospitality to the sojourner.

You can’t claim “Christian Nation” status to defend any number of hot-button topics and then turn around and offer zero compassion to the war-torn, homeless, and dispossessed.

If we are a “Christian” nation, then we need to uphold the chief of Christian values: love for our fellow man.

“Wait, a government’s role is to protect her citizens!” Yes, but what happens when we confuse government roles with Church roles? What happens when we insist that a government uphold Christian values? What then? We can’t pick and choose what issues to apply the Bible to and which issues we don’t. We can’t claim “Christian Nation” when we are arguing against abortion, gay marriage and secularization of public spaces and then ignore Christ’s clear commands to love our neighbors as ourself.

If you want to cling to the status of a “Christian Nation,” then please stop the fear-mongering, because “perfect love casts out fear.”  Stop labeling refugees as candies laced with poison, because we are commanded to “bless and not curse” our adversaries. Stop hiding behind your fear and insecurity because “if God be for us, who can be against us.”

I’m not saying throw caution to the wind. I’m not saying eliminate all vetting processes. I am saying, if we are a “Christian Nation” then we need to start acting more like Christians and less like fearful citizens.  I am saying, please, please, PLEASE consider how your rhetoric and flippant arguments are coming across to the non-Christian world.

The world is watching. My prayer is that the Church, not the state, rises and does what she was called to do, which is love the unlovable into the Kingdom of God: the only true Christian Nation. So let’s stop trying to have it both ways. Let us focus on what we need to do as the Church and let the government figure out what it needs to do in its role. That way, regardless of what happens, we will be ready to serve and love others in the name of Jesus.

*I use this term in quotes because there is considerable debate as to whether or not we are a Christian nation and what that would truly entail if we were.  That debate lies outside the scope of this article which is intended to point out the double standard that many are using to justify their positions.