Last week I, along with people from three different churches in Lunenburg county, went on a short term mission trip to Ensenada, Mexico to build a house for a needy family.  I am not a carpenter.  I do not have any inclination of ever becoming one.  When the Lord was distributing talents he did not see fit to bestow me with any semblance of manual dexterity or the ability to use tools.  Yet, when I felt the Holy Spirit tugging at my heart to help build a house in a foreign land for people I have never met, who was I to argue?  The trip was exhausting yet exhilarating.  My faith was stretched and my body was put to the test.  After having a few days to reflect, these are some of the lessons I learned.

Meeting with Rodolfo on Day One.

Lesson One: Knowledge of tools is just as important as labor

So there I was, on day one.  The plan:  get the house framed and exterior walls in place.  The procedure:  Three crews would work simultaneously;  a cut crew to cut boards to the proper length,  a paint crew to paint the exterior walls before we put them in place, and a framing crew, to nail together  2 x 4s into frames that will make the walls.  It was the latter group that I was selected for and was told to grab a hammer.

As I have already noted above, I am not a carpenter.  I did not know that there were different types of hammers.  To me hammers came in one of three categories: the one you keep in a toolbox for hanging pictures up around the house, a meat tenderizer and last, but not least, the hammer of Thor used to smash comic book villains into oblivion.  So when I went to retrieve a hammer from the large plastic bucket that all the hammers were in I did not pay attention to what kind I was getting.  Surely it didn’t matter what I was using to pound a nail into a board.  Oh, how foolish I am.

The frenzied swinging of hammers began as the staccato percussion of carpentry filled the air.  I began pounding away on my galvanized nail.  With quick and furious strokes I smote the head of the nail, yet it stubbornly stuck and refused to budge any farther.  I looked around.  I saw all the other members of the framing crew hammering their nails home with only three to four blows, yet here I was, on my first nail, wailing away in futility.

It was then I felt a tap on my shoulder.  There stood the team leader, Rodolfo, with an amused smirk on his face.  He pointed at me and said, “You are muy grande…” I thought how inappropriate a time this is to be making fat jokes.  Couldn’t he see that I was busy?  But he continued, “…your hammer is muy pequeno (or “very small” for my English only friends).  He then instructed me on the difference between a drywall hammer and a framing hammer.  Thanks to Rodolfo I was soon properly equipped to bend as many nails as I could in the waning morning hours.

But I was also reminded that zeal that is untrained or improperly equipped often makes little to no progress at best and can actually do damage at worst.  We may be good at stirring up a zeal for Jesus, but unless we train and equip disciples we are making little to no progress in Kingdom growth. 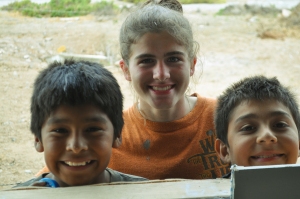 Lesson Two:  Love is a Verb that Transcends Language

Okay, to be fair I already knew this, and no, I did not learn this from DC Talk rapping it to me in middle school.  But I needed a reminder.  I was amazed this week at how our team of 11, with only one who knew enough Spanish to communicate effectively, was able to spill the love of Jesus all over a family of five.   What we could not communicate with words, we did in action.  Whether it was giving the three sons a soccer ball to play with (and subsequently having them school us Americanos in their favorite sport), or it was simply smiling and laughing with them, we were able to love them like Jesus all week long.  It just so happened that a house got built in the midst of this love.

The mission we stayed at for the week did an excellent job of reminding us that simply by building a home we were not solving all of our family’s problems.  In fact, it wasn’t even our job to fix them, because only Jesus can do that.  Our job was to bring hope, and we saw hope bloom in the eyes of a family that had been living in a borrowed chicken coop for five years when they were handed the keys to their new home.  As the boys climbed and jumped on the beds and mom and dad embraced each of us I saw hope in their eyes.  Hope that this world is not full of despair.  Hope that their children will no longer be taken away by social services when the weather was inclement.  Hope that there is a future worth looking forward to.  Hope in a Savior who could inspire a group of people from over 2000 miles away to come and demonstrate God’s love in a tangible way.  We did much more than construct walls and raise a roof.  We, through the grace of God, erected hope on a 16′ x 22′ concrete slab in Baja California, Mexico.

Visiting one of several taco stands in Ensenada

Lesson Four:  When in Ensenada, Go to Pablano’s and Order a Quesatorta

Really, there’s no need for me to explain.  It is that good and that tasty.  In fact, I want one now.

One thought on “What I Learned in Mexico”