I’m a sports fan.  I grew up watching football games on Sunday afternoons, listening to baseball games on the radio as I fell asleep at night and cheering on the Nebraska Cornhuskers every Saturday in the fall.  Sports has always served as an escape for me; a chance to tune out the world and its troubles and enjoy something that really is trivial in the grand scheme of things.  But every once in a while the real world and the sports world collide, and the escape hatch gets locked down. 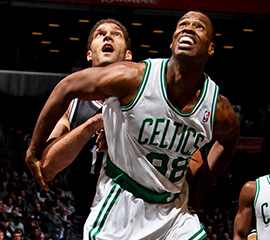 That’s the case this week.  With NBA player, Jason Collins, “coming out” as a homosexual in a Sports Illustrated article, every sports show I watch has been inundated with the news.  Even my favorite radio show, Mike and Mike in the Morning, was covering the news.  According to them, the support for Collins has been “overwhelmingly positive,” and it has been.  He has gotten supportive tweets from the likes of superstar Kobe Bryant among others as well as a phone call from President Obama.  In fact, every commentator, every interview I have seen has been largely supportive.

Now contrast that with ESPN NBA analyst Chris Broussard, who in an interview yesterday politely, lovingly, yet firmly expressed his convictions as a Christian that all sexual activity outside of marriage is sinful.  Immediately the social media world, as well as some in the sports and news media, sought to get him fired, or at the least reprimanded for his statements.

Which one would you rather be?  The guy who gets lavished with praise and support and superlatives like “courageous” and “brave” or the guy who gets branded as a “bigot” and “intolerant” who has the hash-tag #firechrisbroussard attached to his name?  It seems it takes more guts to be a Christian than it does to be gay.

Now let me be clear:  I think Jason Collins is a human being created in the image of God.  As such, he deserves to be treated with dignity, respect and love.  I am sure his life and his temptations have not been easy and that the decision to be open about his sexuality was equally difficult.  I don’t think he should be discriminated against nor slandered in any way.  However, like Chris Broussard, I also believe he is living a sinful lifestyle.

Jesus said on multiple occasions for us to expect the world to hate us, after all it hated Him first.  And the Bible does state that there are those who will call “evil good and good evil.” (Isa. 5:20).  So none of this should surprise us.  But it should disturb us.  In a country that has more Christian influence than any other, when the Biblical worldview is vilified and the sinful lifestyle is applauded, it should serve as a wake-up call to the Church that we are not being the salt and light that Jesus has called us to be.  It should also disturb us, because for a country that supposedly values diversity and religious freedom, the Christian voice is being pushed further and further to the margins.  It would seem that diversity is welcome only as long as it values what the world values.

But most of all, this recent news should spur us on to action.  It should illuminate the need for those who will boldly proclaim the truth in love.  Instead of applauding Jason Collins, let us pray sincerely for him, and all who struggle with same-sex attraction.  Let us show the homosexual community the love of Jesus without ever backing down from the Biblical view of sexuality.  And if we be persecuted, maligned, or worse, then let us rejoice, for our faith was evident enough to warrant attention.

“Blessed are you when others revile you and persecute you and utter all kinds of evil against you falsely on my account.  Rejoice and be glad for your reward is great in heaven, for so they persecuted the prophets who were before you.” -Jesus

2 thoughts on “Who Would You Rather Be?”